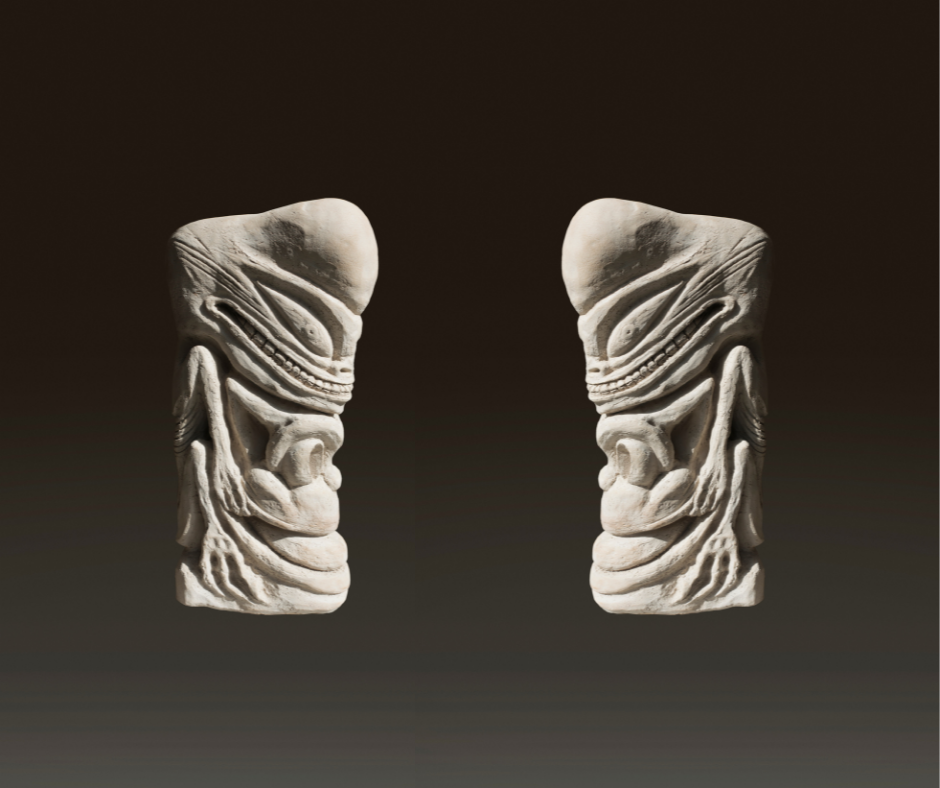 “As I walk along the winding path through the forest, my heart trembles with unearthly joy. I remember a single spot on the eastern shore of the Caspian Sea where I had once stood. It was the same as this. And the sea was calm and ponderous and iron-gray like here. I walked through the forest. I was moved to tears and became enraptured, I kept saying: God in heaven that I should arrive here again! As if I had been here once before.” (Knut Hamsun)

There are some memories that are deeply rooted in us. No matter who we are or where we come from. They are like a distant and primal memory that resides in our basic programming and binds us together, simply because we are human. We can call it mythology or spirit, but really it’s just a global memory we can all access and nurture according to current cultural needs.  Recount, refine, ravage.

With Souvenir, Martin shares his memories. They appear in clay and aluminum – and resemble Tupilaks, Jars, Idols and Demons. They are shaped by the sea and the colors of the mountains in the Arctic. Perhaps you may also recognise a Burmese hunting prayer for a successful hunt.  Revenge. Desire. Or a bit of Disney. Plenty of action and a need to have just a slight influence on the wind and weather in Sumerian times. Martin Brandt’s brain has gone into reminiscence mode and his memory is boundless.

But of course Martin has an origin. And the supporting vessel for this story is found in his Greenlandic heritage. It looks a bit like a Tupilak. A figure (or phenomenon) he has consistently worked with because of its complicated history and its continued presence in modern times, despite the long journey through generations of memories. The Tupilak is linked to a primal narrative. But in the present, Tupilak is carved from the bones of sea creatures. Sculpted by Inuits with particular traditional aesthetics in design, expression and storytelling. It’s also the white man’s spelling board when he visits the spirit world and tries to comprehend what his imagination can’t grapple with. And, of course, the Tupilak is the most famous souvenir from the Arctic.

This journey is not exclusive to Tupilak. There are mythological and cultural appropriations and bastardry everywhere. These artifacts come from a place of great importance – and they end up surviving as souvenirs. That’s what happened to Pazuzu. In Mesopotamia, Pazuzu was the embodiment of the West Wind itself. And in 1973, he/she/it occupied Regan in The Exorcist. And now Pazuzu reappears in this exhibition, fresh from Martin’s memories, ready to be part of a new narrative. And so Pazuzu ends up (along with others) in our narrative. That’s what the best souvenirs can achieve when you show them to others. We can feel them and recognise them because we are human – even if we have never been there ourselves, or seen them before☺